skip to main | skip to sidebar

I decided to try the De-Googling Your Life thing after Google killed yet another service I'd come to love and depend on: Google+. This is my list of things I've been able to replace Google services.
Gmail: This is a tough one. Gmail has great spam filtering and a good interface. I've run my own mail servers in the past for work (qmail, dovecot, sieve, etc) so the backend wasn't a challenge - just spun up a Linode. I experimented with numerous different front-ends, squirrelmail, roundcube, etc until I found a really good one: rainloop. It took some tuning to get it to talk imap, but I've been really pleased with it.
Drive: This one was tough - there are a lot of commercial file storage systems out there, but largely I used Drive to keep live backups. I'm now using Syncthing, with one of the folders shared via s3fs - so I could drop something in the s3fs folder on any of my devices and it'd be available on the web in an s3 bucket in minutes when I need to share to other people. Cool!
Android/Google-Fi: Google Fi is just too good, I haven't found a good alternative to this. I'm going to need a new phone soon, and have been researching other alternatives. I'm not sure, with Google Fi, I'll be able to use any other alternative OSes on Android-style hardware, and I refuse to go the Apple route. Blech.
Google Docs: I've reverted back to using desktop apps (Libre Office) for spreadsheet and more complicated word processing, and installed Codiad on my dev server for day-to-day note taking and development. There really aren't any good FOSS, online, self-hostable office style apps. At least not that I've found.
Chrome: I've been mainly using Firefox, Brave, and Tor for awhile. Chrome/Chromium's network password storage was nice; but I've trained myself to use KeePassX/XC full time. It's cross-platform, and synced with Syncthing I'm never without the freshest copy. KeePassXC will even do TOTP, though keeping your one time password generator right alongside your password is a questionable thing to do.
Google Reader: This one hurt the most. I had a massive list with many custom filters. I replaced it with tt-rss. Miniflux. The tt-rss guy is a jackass so I abandoned it.
Search Engine: DuckDuckGo. Startpage. I will bounce over to Google now and then when DDG's results are a little lacking, which they sometimes are - especially for looking for specific things to buy online.
Photos: I've always used flickr. There have been some design changes that people haven't liked about flickr's website, but I think they've only improved it over time. I'm happy to pay for that unlimited storage and instant backups for any pictures I take. I've been mulling creating a syncthing-folder automatic gallery app for awhile, but flickr works well enough. If flickr ever shows signs of being in trouble, I'll push forward with the idea.
Hangouts: Another service of theirs I really, really came to depend on and was furious when they pulled. You can still access it as a Google Fi user, but it acts pretty brain damaged these days. Most people I chat online have moved onto other services, like Telegram, Signal, or Facebook Messenger, or back to IRC. I detest facebook, but at least you can sideload 'lite' versions on android and sandbox facebook in a tab in Firefox.
#100daystooffload
Posted by Sultmhoor at 9:17 AM No comments:

Virtual touristing, it's what we've got left, Day 5

Last night I fired up the "Wander with Friends" app in my Oculus Go after seeing an interesting picture in a brutalist architecture group on flickr: 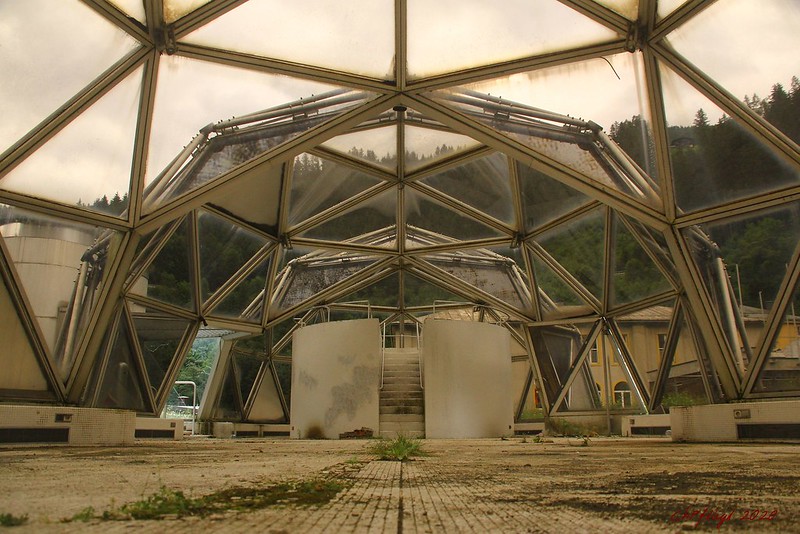 I'm such a sucker for geodesic domes and brutalist architecture so I had to see where this was. It took me an hour of wandering around the Austrian town Bad Gastein to find it in the middle of town, an apparently decaying municipal building. I fear my post-pandemic "to visit" list has now exceeded my calculable life span. Guess I should learn some Tourist German.
Posted by Sultmhoor at 1:00 PM No comments: